This post is sponsored by Weber Grills.  Rest assured, all opinions are my own.

I can eat Mexican food everyday and be satisfied.  Pollo asado, a classic Mexican dish of roast chicken will never go out of style.

If there is something I have truly missed this year it is traveling.  When I travel to visit friends, it brings me great joy.  I’m not going to lie, I travel to great food as well.  In the last couple years I’ve found myself traveling to Texas the most.  Firing up a grill with my friends is some of the best therapy a gal can get.

Sure, I love traditional barbecue and there is a lot of great barbecue in Texas.  However, it is great Mexican food that I am always on the hunt for.  I recently tried out the newest Mexican restaurant in town.   I ordered their pollo asado and what I received was 2 pieces of flavorless chicken that didn’t have any visible seasoning.  Thus, the motivation to create my own recipe.

My pollo asado will be made with love then grilled over charcoal on my Weber grill.  I also used of the Weber Connect Smart Grilling Hub to monitor my cook.  It is a step-by-step grilling assistant that will make sure my chicken is cooked perfectly.

What is pollo asado?

Pollo asado translates to “roast chicken” in Spanish.   Some people also translate that to mean “grilled chicken”.   If we are being technical, you can roast on a grill.  The way I look at it, chicken plus flavor plus fire equals delicious!  When I think pollo asado, I think of chicken that has been marinated in citrus, achiote/annatto paste, Mexican oregano and a few other ingredients.

Marinate the chicken for a few hours or up to overnight.  After marinating, the chicken will be flavorful, colorful, and ready to grill. Sure pollo asado doesn’t necessarily have to have these ingredients but it is my interpretation.  I assure you, it is a delicious one!  Let’s discuss some of the more unique ingredients before getting to the recipe.

What is achiote or annatto paste?

Achiote paste or annatto paste is made from annatto seeds, the seeds of the achiote or lipstick tree.  Formally, Bixa orellana is a tropical plant which thrives in a warm humid climate.  The seeds are ground and mixed with other spices to make a paste or powder.

Do not, I repeat, do not buy your own annatto seeds to make into a powder or paste unless you have some kind of industrial spice grinder.  Those seeds will ricochet all over your kitchen if you dare to attempt to crush them in a mortar and pestle.  If you attempt to put them in your household spice grinder, you won’t get far.  The paste and/or powder is cheap and readily available.  Just buy it.

Achiote or annatto seeds are used to give dishes a yellow-orange color and can also be used to enhance flavor.  Most commonly, they are used throughout cooking in Latin America, Mexico, and in parts of the United States.

The seeds are steeped in oil giving it a beautiful red color.  The seeds are then discarded and the oil used to color and flavor various dishes.

Achiote/annatto is commonly used as a natural food coloring in many products including cheese, butters and other processed foods around the world.  That is right,  I’m looking at you cheddar and Velveeta!

Achiote or annatto paste: what does it taste and smell like?

To be honest, to me, it was hard to discern exactly what flavors and scent is.  When I smell the paste, it comes across as a musky earthy scent.  Some people say annatto is peppery or floral.  Considering the paste is made from annatto seeds plus a few other ingredients which vary from brand to brand, one can see why there is a discrepancy in opinion.

What is Mexican oregano?

There are multiple types of oregano available.  Most commonly there is Mexican oregano or Mediterranean oregano to choose from.  These are not the same plant just grown in different regions.  Mexican oregano is a different plant all together from most of the oregano we use in the US. 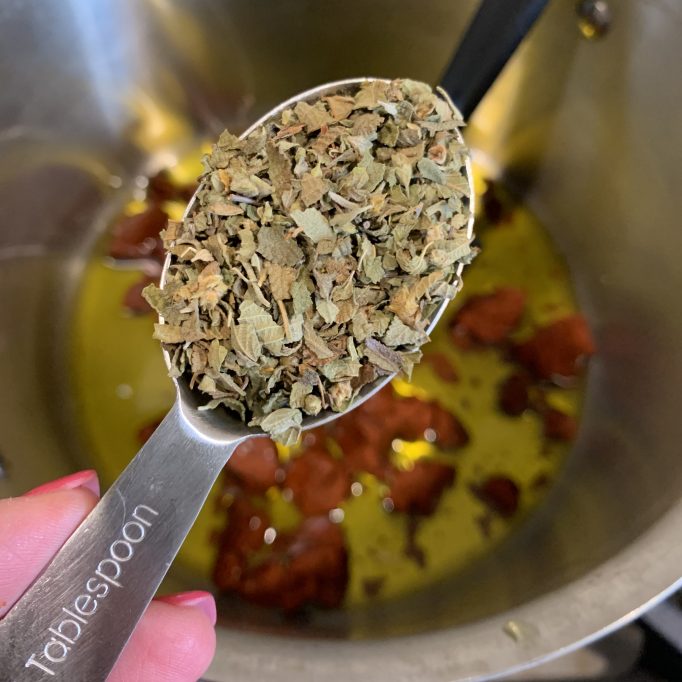 Can you interchange Mediterranean oregano for Mexican Oregano?

This is going to come down to personal preference but I can’t see using them interchangeably for the sole reason the taste different.  If you are looking for a certain classic taste for either type, you won’t get that by substituting one for the other.

Where to buy Mexican oregano

Depending on where you live, Mexican oregano is available in many grocery stores.  If you are lucky enough to have a Latin market nearby, they should certainly carry it.  Personally, I am a fan of ordering my spices online.  You can find just about any spice from Spiceology and know it is great quality.  Likewise, you can find different varieties on Amazon.

There is just something about grilling chicken over charcoal that makes it extra special.  The wood provides an extra layer of flavor that greatly compliments Mexican dishes.  For my pollo asado, I am going to grill the chicken over indirect heat on my Weber Performer.

To assist with temperature monitoring, I am using the Weber Connect Smart Grilling Hub.  The Weber Connect is a step-by-step grilling assistant which allows you to monitor your grill and food temperature remotely.  Through the iOS or Android app you can keep an eye on your cook because the Connect is Wi-Fi and Bluetooth enabled.

The most important advice I can give someone when cooking is pay attention and don’t overcook your food.  Cooking isn’t difficult as long as you have the right tools and some helpful tips.  I used the Weber Connect Smart Grilling Hub for monitoring the temperature on my whole chicken I cooked as well as the chicken thighs.

What should I serve with pollo asado?

The cut of chicken I decide to use for pollo asado often dictates how I may serve it or what I might serve it with.  When I make chicken thighs I like to either eat them with some fresh cilantro, lime wedges, onion and perhaps some elote (Mexican street corn).  Whether a flavorful whole chicken or thighs, taking the meat off of the bones for tacos is a fabulous idea as well.  In fact, I like to cut the corn off the cob and mix it with all of the usual elote ingredients.

I will then use it as a filler with salsa verde for the tacos.  Rice or beans would make for great sides as well.  I’ll include the recipe for elote as well in this post.

What cut of chicken should you use for pollo asado?

Can I cook pollo asado in the oven?

Absolutely!  Of course I love getting the flavor from the charcoal when I grill chicken but it’s not necessary at all.  Prepare the chicken and marinate it the same way for either method.  Trust me, if it’s freezing outside, you won’t see me hesitate to bake it in the oven.  It’s roast chicken after all.

Regardless of which cut of chicken you decide to cook, 375-400˚F will work either way.  Just make sure you cook chicken to 165˚F internal for white meat.  For dark meat such as legs, I like to take the temperature to at least 175˚F where it is more tender because the connective tissue begins to break down.

The recipe is quite straight forward.  You are essentially making the pollo asado marinade, letting the chicken marinate for 4-8 hours, then cooking it.  I don’t recommend marinating chicken for much longer than 8 hours as sometimes the citrus can affect the texture of the chicken.

With the heat on low, combine the annatto paste with olive oil in a small saucepan.  The annatto/achiote paste is challenging to break down completely.   It remains quite clumpy despite efforts to smash it up.  You have two options.   You can do the best you can breaking it up and using the marinade just like that or put the cooled marinade in a blender to create a smooth texture.

Aesthetically, the marinade that was run through the blender looks might nicer on the finished chicken. 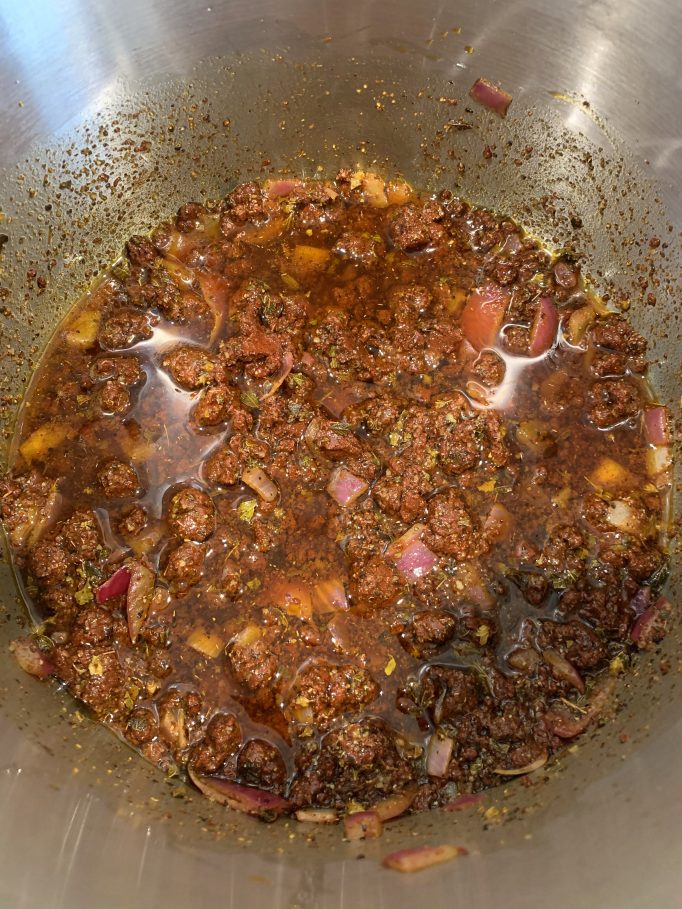 Once the pollo asado has finished marinating, prepare your grill for indirect medium heat or preheat your oven.   When grilling the chicken, I like to have a direct heat area as well.   I move the chicken over to the direct side to get a bit of char but that is completely optional.  Because the pollo asado marinade has oil in it, don’t leave the grill unattended in case of flare ups. 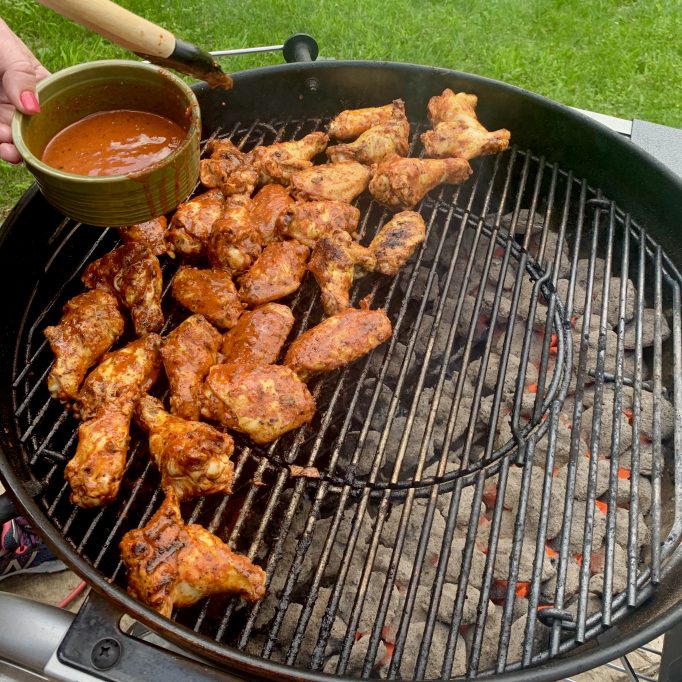 Baste chicken with marinade at least once throughout cook 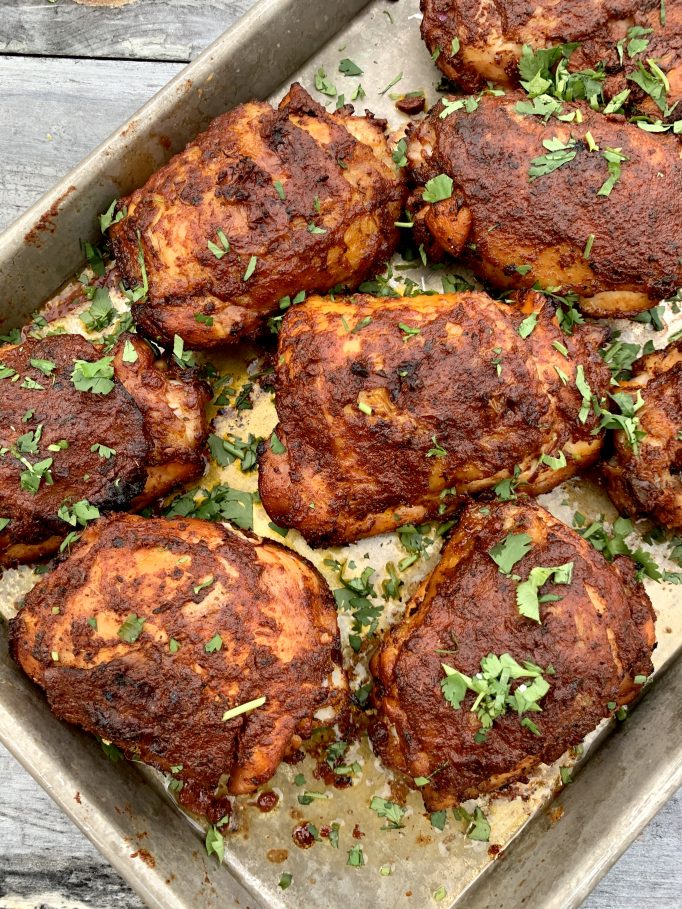 I love to serve this chicken with a side of tortillas, cilantro, onion and lime to squeeze over the top.  It is delicious as it is, but also makes some spectacular tacos when chopped up. 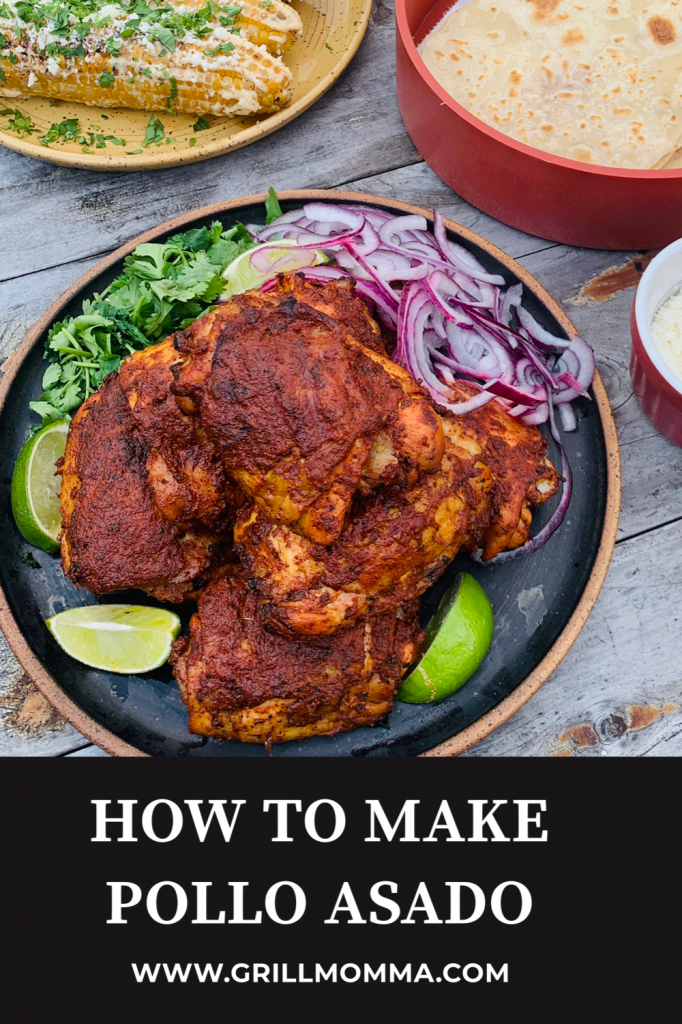 Looking for more great chicken recipes?  Check out my Orange and Ginger Grilled Chicken or my Spicy Grilled Apricot Wings. 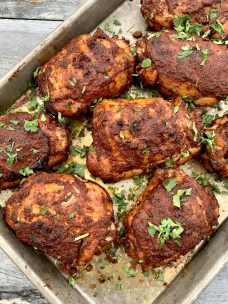 How to Make Pollo Asado

*The time to cook the chicken will depend on the size of the pieces and the type of chicken you are cooking. When grilling, periodically check chicken and rotate on grill if necessary for even cooking. Cook to temperature, not time. *Marinate chicken for 4-8 hours under refrigeration. The longer you marinate, the more flavorful it will be. I don't recommend much longer marinating as the citrus in the marinade can make the chicken tough. 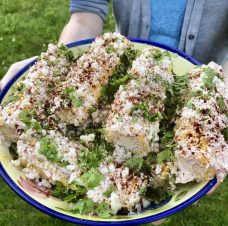 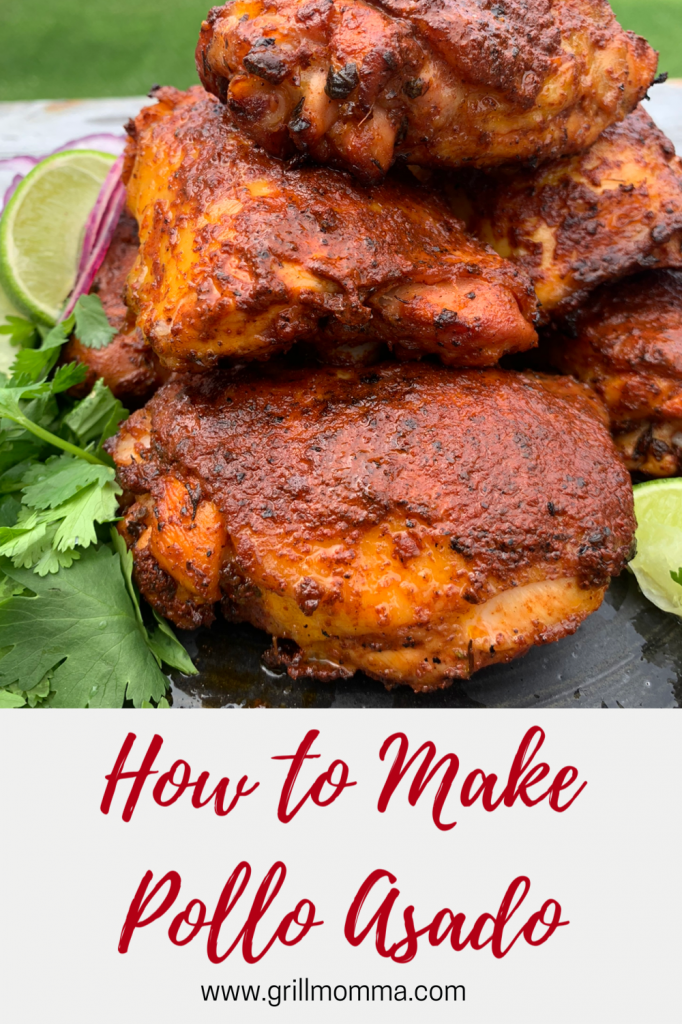