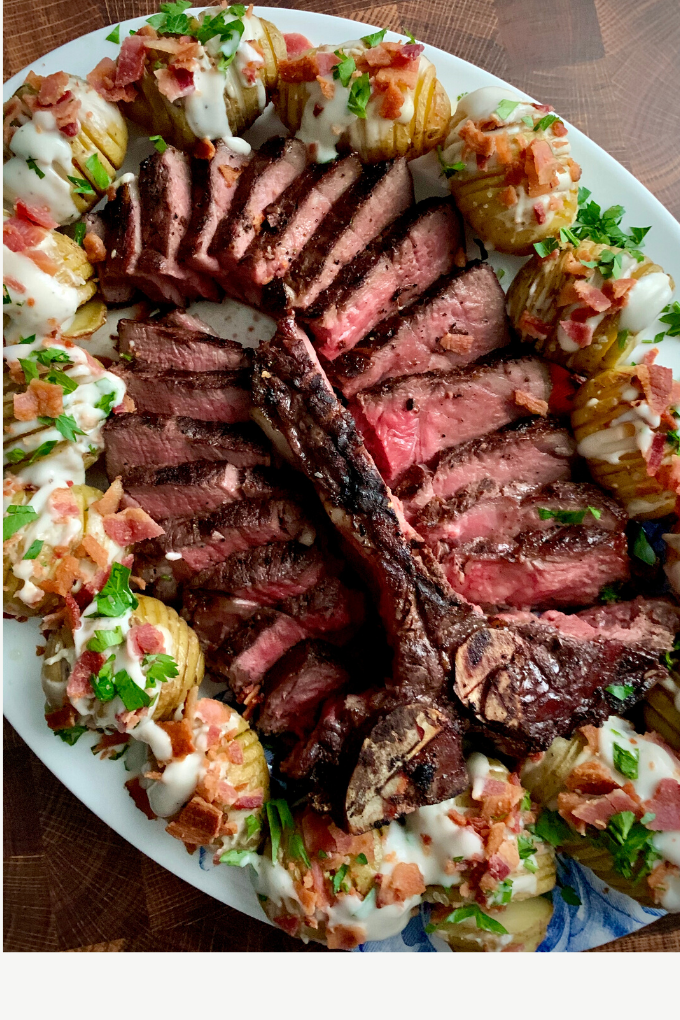 This post is sponsored by Omaha Steaks and rest assured all opinions are my own.

When I was young, my father took us out for a dinner and I would always order steak.  For some reason, I had the ability to plow through a steak like it was my job. My father would brag to the waitress about how much I would eat.  I would eat a big piece of prime rib and it would make my Dad proud.  I’ve always had a fascination with large cuts of meat.  I looked at it as a challenge.  I know I can’t eat this giant T-bone steak with bacon Alfredo hasselback potatoes by myself  these days!

Without fail, my side of choice when having steak is always a potato of some sort.  Steak and potatoes, it is classic isn’t it? Sure, I realize it would be more nutritious to have a vegetable of some sort, but hey indulging is fun.

For this cook I wanted to surprise my son with a massive platter of steak and potatoes but I wanted to give it a twist.  This would be a perfect platter to share with any of your loved ones or friends and can easily feed at least 3 people. I decided to cook a 48oz King Cut T-bone steak from Omaha Steaks with a side of bacon alfredo hasselback potatoes.

Look at the size of this beast!  Even though these are sold as T-bone steaks at Omaha Steaks, I lucked out with this one as it would actually classify as a beautiful porterhouse steak because of the size of the tenderloin or filet portion.  No doubt it was one of the most impressive porterhouse steaks I have ever had the pleasure of eating. It had a massive filet and a massive strip on opposite sides of the bone.

To read more about what makes a porterhouse a porterhouse and not a T-bone steak as well as alternate methods to cook one, check out another one of my blog posts here. 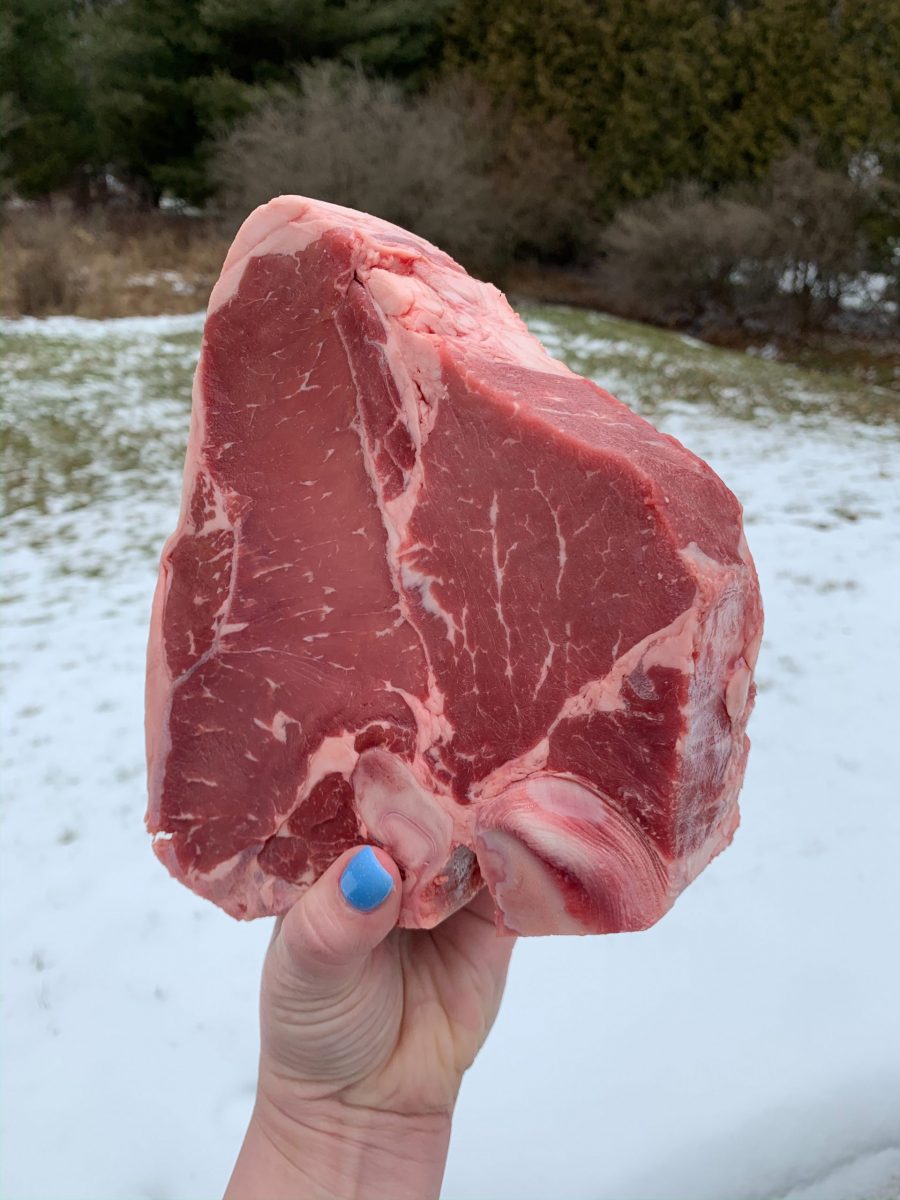 What are Hasselback Potatoes?

Before we get to the recipe, we should probably discuss what hasselback potatoes are.  Hasselback potatoes are potatoes that are sliced along the entire length of the potato approximately half-way through, seasoned then cooked.  Imagine you are slicing potatoes to make potato chips but leaving the potato attached at the bottom of the potato. These potatoes were originally served in a restaurant in Sweden named Hasselbacken, hence the interesting name.  All I know is they are crispy on the outside and soft and delicious on the inside, and that makes me love to eat them.

To cook the steak I am going to use the reverse sear method.  With a steak this large, it is beneficial to bring the internal temperature of the steak up slowly.   You can cook it in the oven on a raised rack, or cook on your grill indirect at 250ºF.  I prefer to cook until 10-15 degrees short of your ideal finishing temperature.  For this steak I will grill it until it is 120°F, then sear it over a direct fire on both sides (approximately 90 seconds per side). 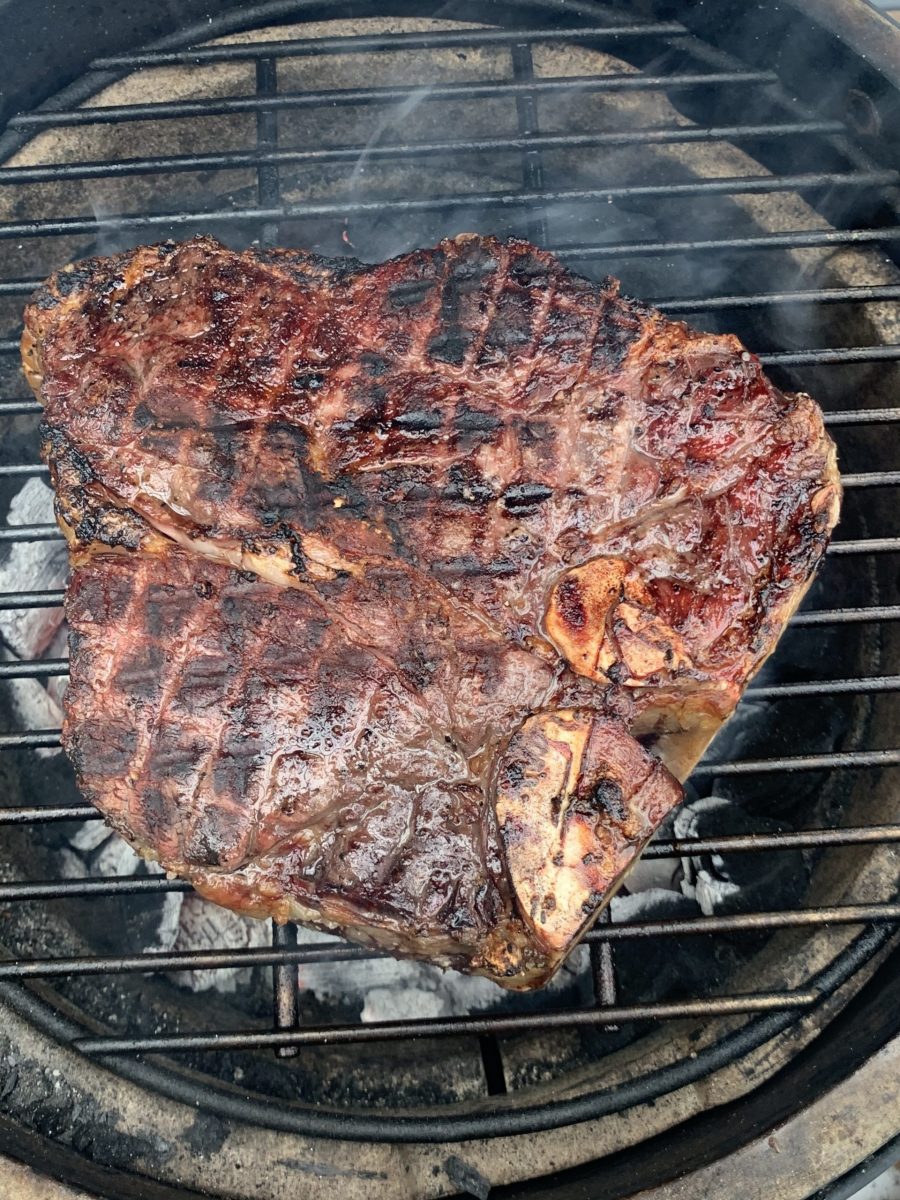 If you don’t want to fire up the grill, that is okay as well.  Alternatively, sear the steak over high heat with a bit of ghee, higher smoke point oil, beef tallow, or bacon fat indoors on the stove.  You might want to crack the windows however as the pan will likely smoke a bit. 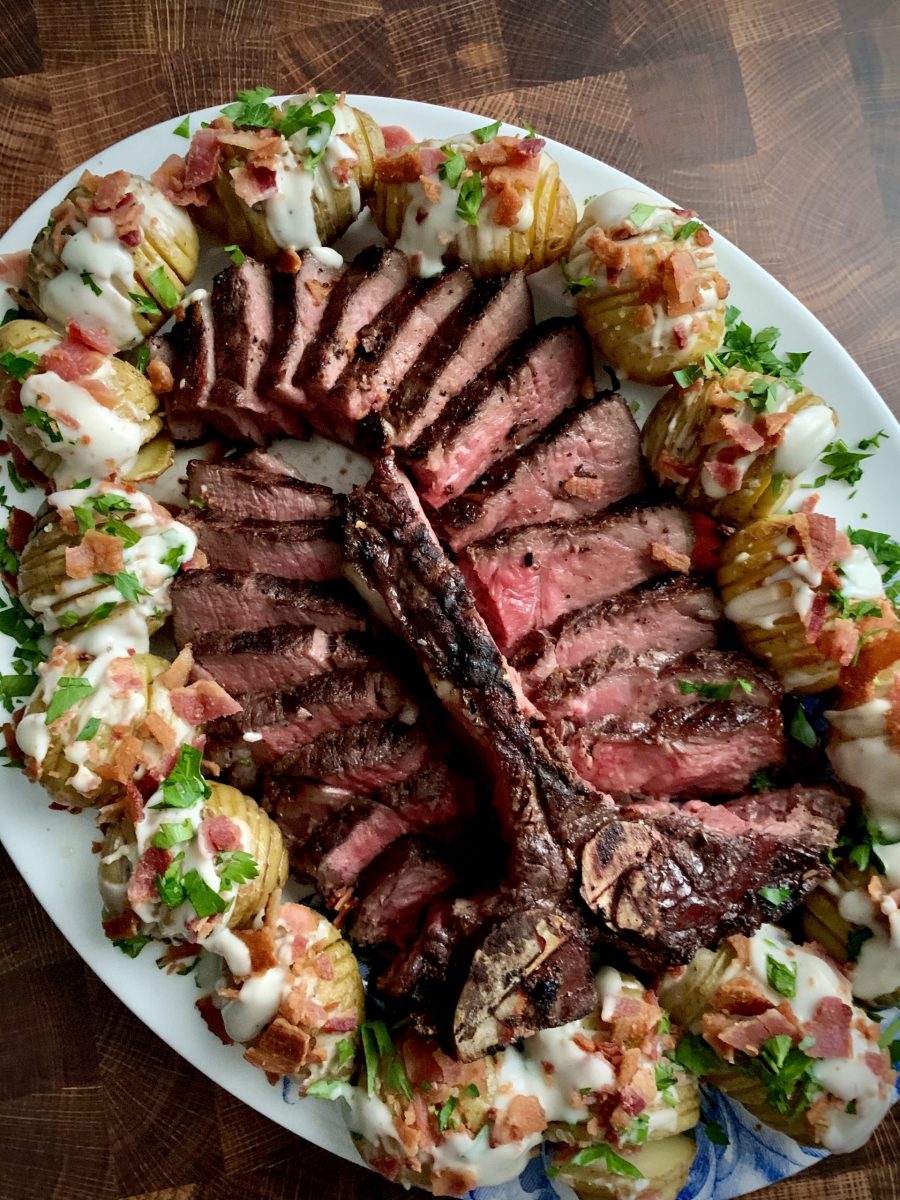 The hasselback potatoes can be prepped while the steak is cooking.  The steak approximately 90 minutes or so to cook so you have plenty of time.  To cut the potatoes there are a few options. If you don’t have a gadget like I do (a hasselback potato slicing rack) to cut the slices part way through the potato, you can lay down two chopsticks as a guide to not let your knife cut through the potato all the way.

Laying the potato on a wooden spoon is also an option. Just be extra careful when slicing the potato. It is also a good idea to take a little sliver of potato off of the bottom of the potato to create a flat surface for the potato to sit on as it is more stable. As for the type of potato to use, I like Yukon Gold, Russets, or even red potatoes. 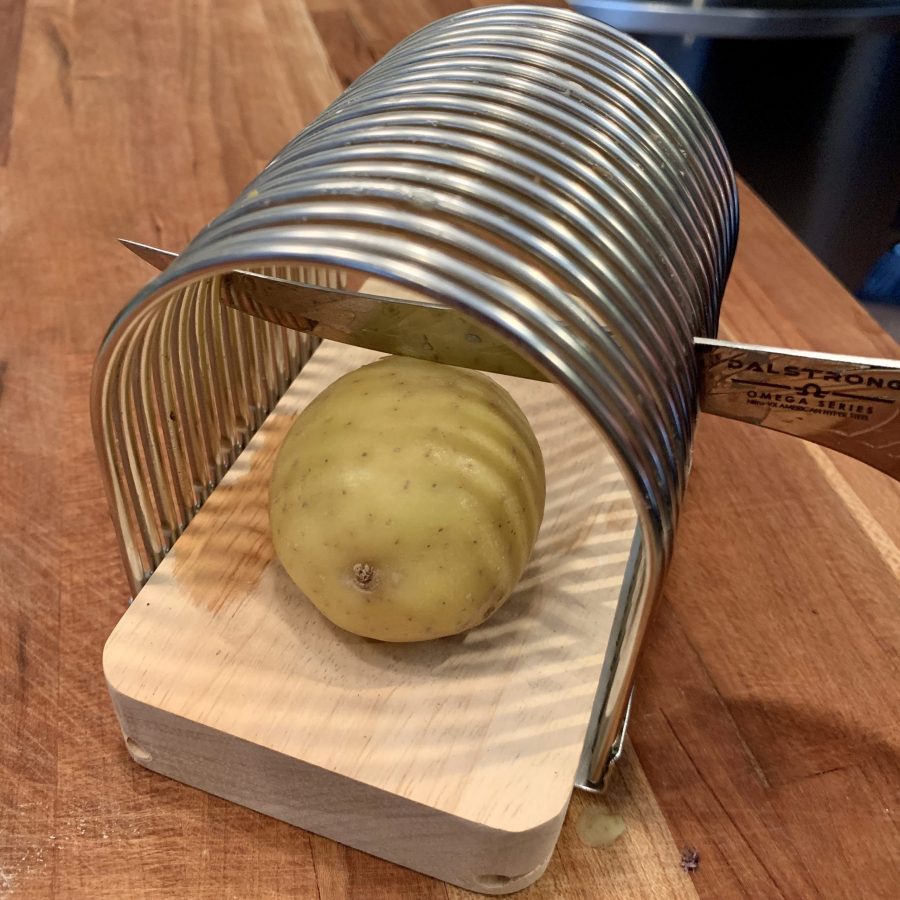 Once all of your potatoes are cut, I coat them with some olive oil and try to get some of the oil in between the slices of potato so they will separate and crisp up while cooking. 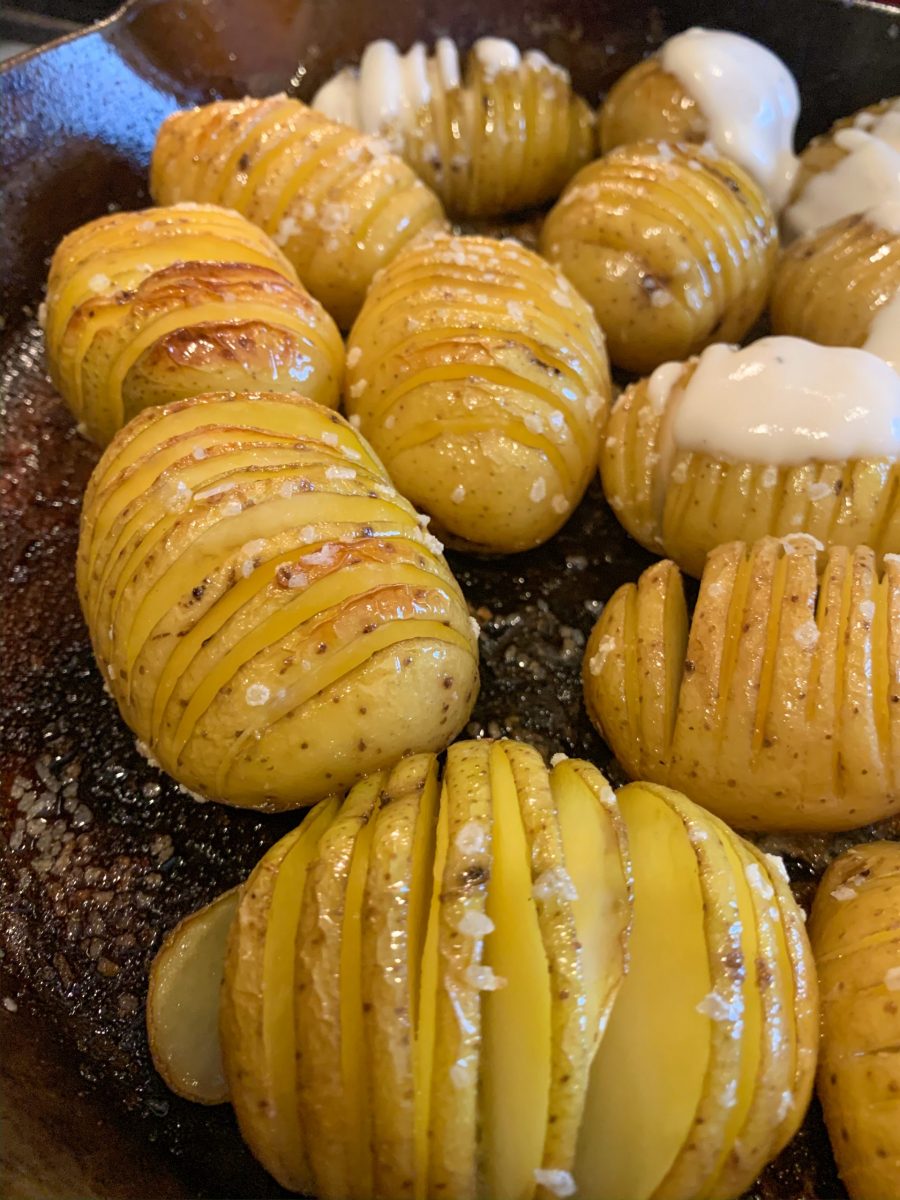 All that is left is to crisp up some bacon for bacon bits, chop some fresh flat leaf parsley, and to make the alfredo sauce to top the potatoes with once cooked.  If you don’t want to fry your own bacon or make your own alfredo sauce, you can certainly buy some pre-cooked bacon to finish off and chop up or even some jarred alfredo sauce.

Treats for the cook

I’m going to be honest with you here though. Half the fun of making a recipe with bacon is that you can treat yourself to a few slices as you are cooking and no one will ever know.  Cooks rules people. I’d be lying if I told you I didn’t also cut off a hunk of parmesan cheese to munch on while making the sauce as well. I highly recommend making your own alfredo sauce as it truly simply to make and is so delicious. 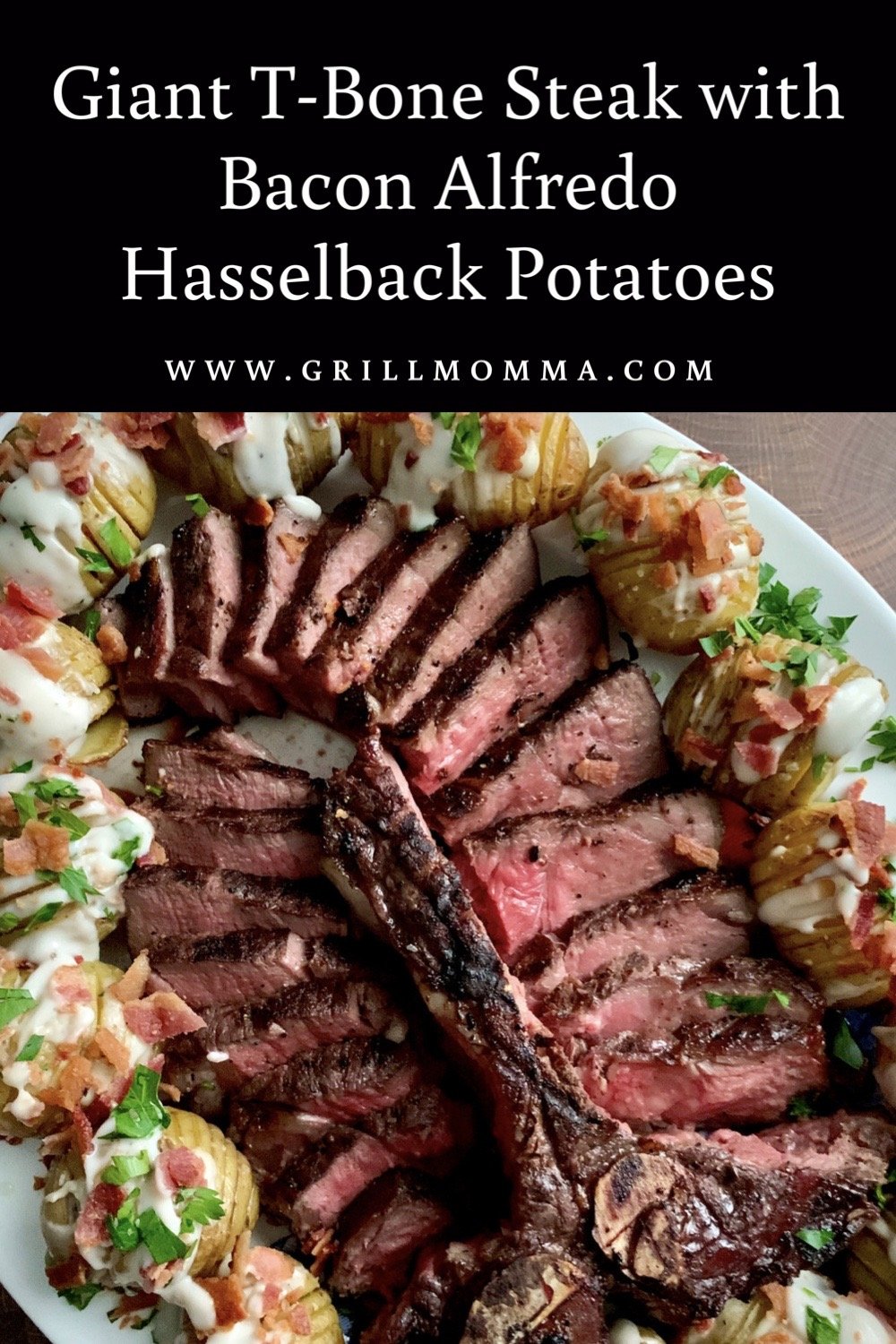 Want more beef recipes? Check out my post on how to cook picanha here. 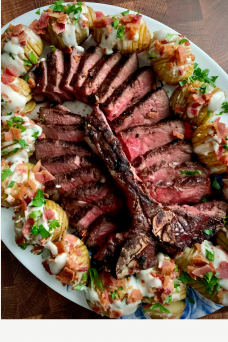 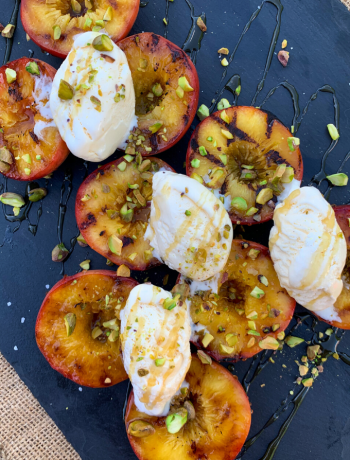 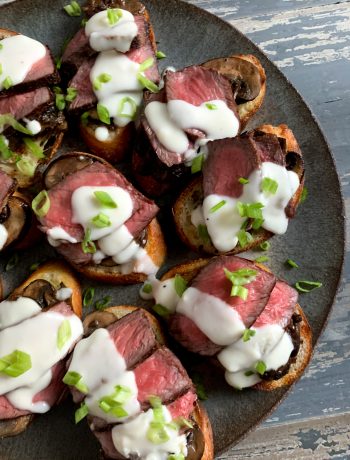 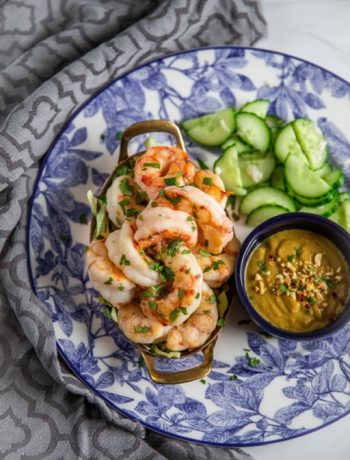