This post is sponsored by Bernzomatic but rest assured, all opinions are my own.

In the holiday war of ham vs turkey, I’m team ham unless there is homemade stuffing involved. It’s true, I confess that stuffing or “dressing” for those of you who insist, is my favorite part of Thanksgiving. But today, we are talking ham. I love ham not only for the main meal I’m serving it at but also to cut up for ham and eggs the next day, or for making a pot of homemade ham and bean soup.

I can’t remember the first time I had a magical ham from a place called the Honey Baked Ham Company, but all I know is that it was fabulous and different from any ham I had before. The Honey Baked Ham Company makes a spiral ham with this wonderfully sweet crunchy glaze on the ham. Locations where I live closed down a long time ago, likely because it’s quite a recessed market here and not many people can splurge $85 for a 9lb ham. However, the company is still alive and well. The company started in 1957 in Detroit, Michigan and has a number of locations across the United States. Fun fact: founder Harry J. Hoenselaar is credited with creating the spiral-slicing process! The good news is, you only have to spend a fraction of the cost to create the same delicious ham in your own home.

A word first about spiral hams. Spiral hams come fully cooked and can be served at room temperature or warmed gently through. Many people make the mistake of heating them at too high a temperature or for heating them too long until they become dried out pig jerky. To make this ham, we will cover it in honey, heat it at 275F, then glaze and torch it using the Bernzomatic ST2200T Detail Torch to create that great sweet exterior. I’ve cooked a fair share of spiral hams and my preference is to cook it about 10 minutes per pound and not the 15 minutes that some people recommend.

I would like to note that just about any Bernzomatic blow torch would be perfect for torching the glaze.  The detail torch has a much smaller flame and this is the torch that many have in their kitchens so I used that torch for this application.  The Bernzomatic TS8000 Max Heat Torch and Bernzomatic BZ4500HS have much larger, wider flames which you can use to your advantage to torch the glaze even faster. 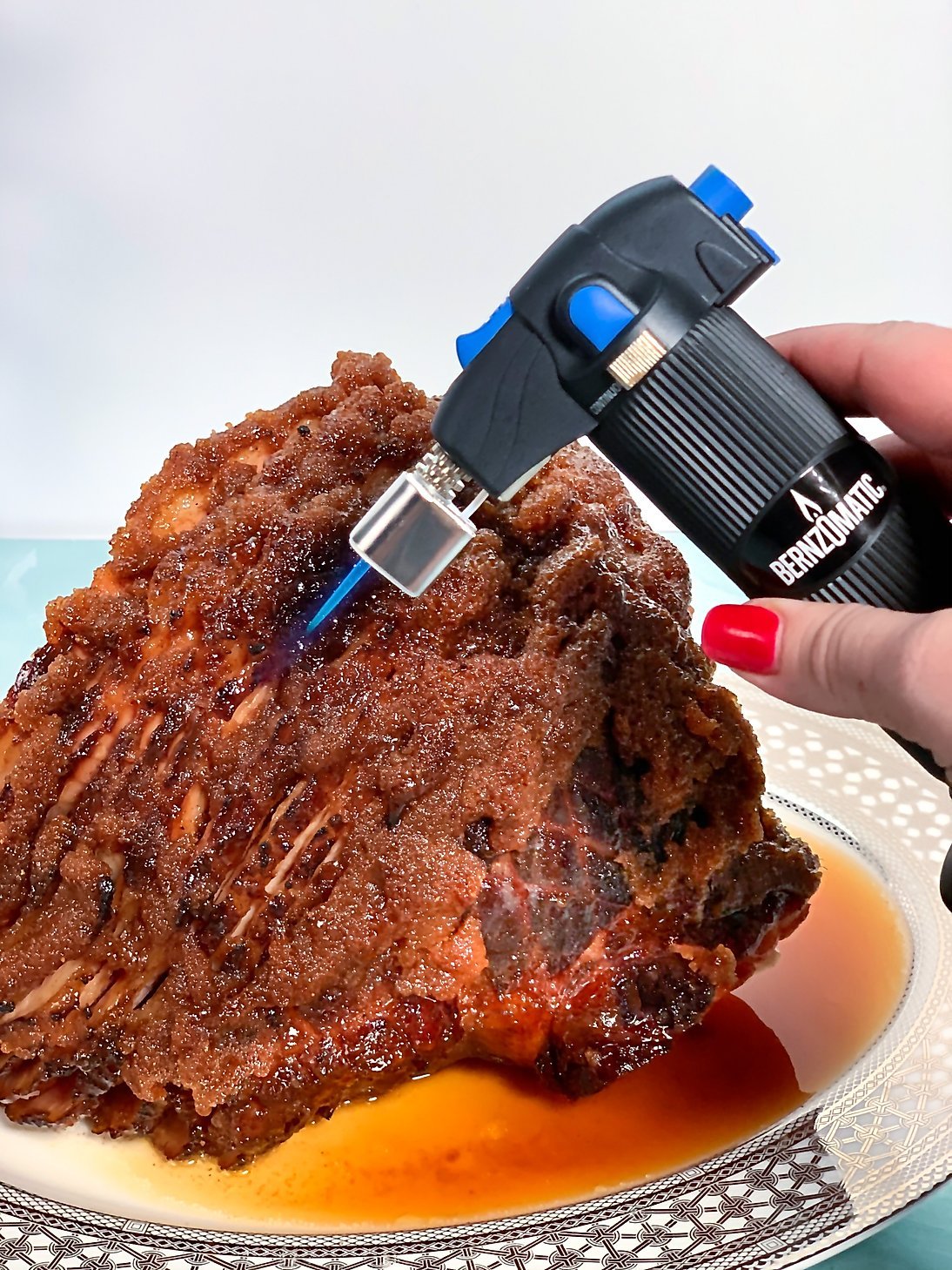 Sugar gets hot when you melt and boil it! As sugar moves through the different stages of cooking, it can far exceed the boiling temperature of water. I have a habit of taste testing things as I cook. No joke, I did that before with a sugar mixture, and without thinking properly, I burnt my tongue and face as I frantically tried to get it out of my mouth at a supersonic speed. Please take my carelessness that one time as your fair warning.

If you are using one of the larger torches mentioned, an alternate method to instead of boiling the sugar, is to take the sugar/spice mixture dry, spread it over the surface of the ham, then torch. I think it’s easier to put some of the mixture on, torch, then add some more and torch again so you achieve a thicker layer of delicious sweet exterior.

Blowtorches:
Blowtorches are so much fun to use and are nothing to be intimidated by! You can use them indoors or outdoors for a whole bunch of different projects. Trust me when I say, my friends love to help when I pull out one of my torches.

Spices:
Feel free to adjust the spices to your personal preference in the recipe. I love the taste of clove on a ham so I use a larger amount than other similar recipes out there. If you don’t have some of the spices in the recipe, check out the bulk spices in your local grocery store. You can save a lot of money by packaging and weighing the spices yourself.

Honey:
Oh we can talk for a long time about honey vs fake honey. Estimates say that around ¾ of supermarket brands of honey cannot be classified as honey. Trust me when I say: read labels, buy organic if possible, or look for reputable honey sources. Spend a couple extra bucks and get the real stuff. It’s better for you and tastes delicious. 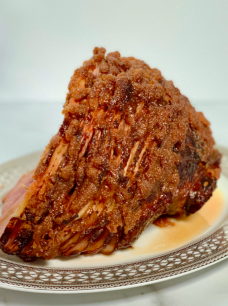