As an avid griller I was very excited to get my hands on the Little Griddle Kettle-Q Stainless Steel BBQ Griddle.   I love cooking on cast iron on my Big Green Egg but sometimes, I would long for a bigger surface area to cook on.   There was constantly a need for more space to not only cook the food, but also to maneuver it around the cooking area.

Certain foods such as rice dishes don’t exactly lend themselves to cooking on cast iron despite how well the pan may be seasoned.  Upon initial opening of the box, I was greatly impressed by the quality of the product.  It has a great weight to it (11 lb to be exact), and is made entirely of stainless steel.   The sidewalls of the griddle have a nice height to them which is about an inch and a half above the cook surface.   That’s something I certainly appreciate as sometimes I get a little overzealous when I cook.

There were so many things I initially wanted to cook on the Kettle-Q, but I figured I would initially try some of the things that sometimes can be a bit daunting on a regular grill or cast iron pan surface.

High heat is not needed and actually not recommended when using the griddle (aim for 300-350 degrees).  I light my charcoal, shut down the vents quite a bit on my Big Green Egg, then put the Kettle-Q on to preheat.  The way I look at it, there are really a few different options when you are cooking on the Kettle-Q.   Will you be closing the lid during the cook or keeping it open?

If you are keeping it open, you absolutely have the risk of your charcoal burning hot despite how far open the vents are.  Are you cooking something that needs a lot more time to come up to an appropriate temperature and maybe using indirect heat (using the plate setter underneath) would be a feasible option as to not overcook the outside of your food before the inside is finished?  I explored both of these avenues in my initial cooks.

For breakfast I decided to make bacon, home fries, and bananas foster french toast with candied pecans.  Having the space to drop a whole pound of bacon down at one time to cook is just fabulous. I sprayed the surface of the Kettle-Q with a bit of high temp cooking spray prior to putting the bacon on.  I closed the lid on my Big Green Egg and let the fat slowly render away.

I would periodically check on the bacon to see when it needed to be turned, and perhaps move different pieces around the surface.   This really was low maintenance bacon, and I have cooked a lot of bacon.  It came out uniformly crispy and without any portions being over or under cooked.  After I pulled the bacon off, I used a scraper to take any residual food off of the griddle surface and pushed it into the drainage well.  For the hash browns in the interest of time, I bought a pack of those refrigerated pre-shredded packages of raw potatoes.

I cut up some fresh onions and peppers, and cooked them in a bit of olive oil prior to mixing them in with the potatoes.  I was concerned about the starch from the potatoes making them stick to the surface, and I also wanted nicely browned hash browns so I sprayed it down with cooking spray, and also tossed the potatoes in a couple tablespoons of oil and some seasonings prior to putting them on the surface.

Using the extra long stainless steel turner that Little Griddle offers for sale both individually and in their Deluxe Cooking and Cleaning Kit (which I highly recommend purchasing) to flip the potatoes.  That was certainly easy enough!  I cooked them until they were browned up a bit on both sides, and I couldn’t stop myself from eating them.  To clean off The surface, I put a bit a water directly onto the griddle top and scraped any bits into the drainage well.

French toast is a breeze on the the Kettle-Q.   I sprayed the top down with cooking spray, and within a few minutes, I had perfectly browned pieces of french toast.  I toyed with the idea of making my bananas foster sauce on the griddle top, but in the interest of time, and since I would be caramelizing sugar, I just did it in a stainless pan on my stove top.  I might try someday putting a little stainless pan directly on top of the griddle.  Hey why not, I’ve done crazier things on my Big Green Egg. 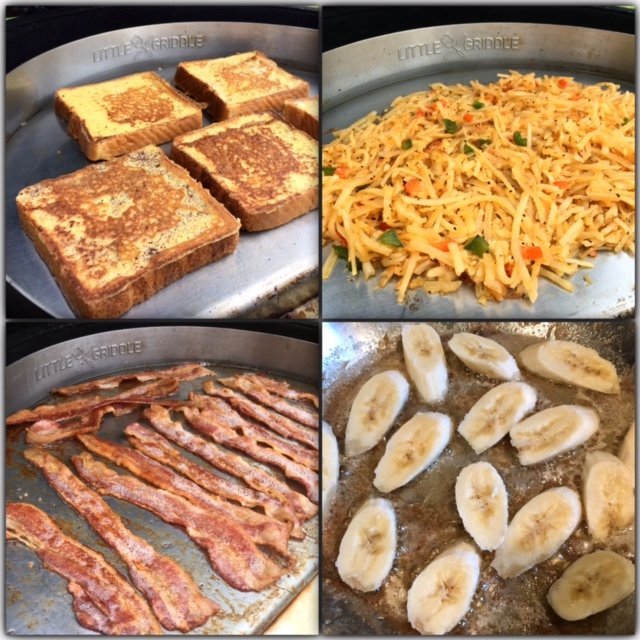 For lunch I wanted to do a big ring of Italian sausage with peppers and onions. I’ve done sausage plenty of times on a grill, both directly on the grates and in a cast iron pan.  I wanted it to be nicely browned and cooked thoroughly of course.  I decided to try going more indirect heat for this cook and used the plate setter.  My end result was fabulous!  I’m not sure if the results would have necessarily been that much different if I had not used the plate setter, but I was able to walk away from my Big Green Egg while the lid was closed, and I knew where I was sitting temperature-wise.  I allowed it to cook slowly, and achieved the result I was looking for.  When the sausage was about half way done,  I put the peppers and onions on the griddle with a bit oil and seasonings.  I will definitely do my sausage that way again! 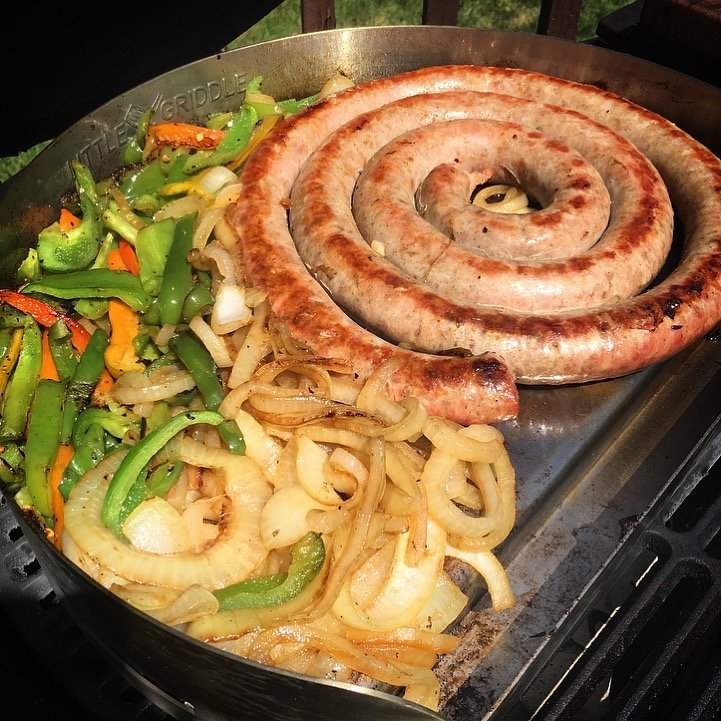 For dinner I created a “Teppanyaki or Hibachi” style meal.  I was really excited to see if I could recreate the meals that well, we pay a lot of money for locally.  I easily cooked some onion, mushrooms, zucchini, on the griddle surface, then put down my pre-cooked jasmine rice that I seasoned.  I would flip it periodically to “fry it”.  I pushed the rice off to the side, and cooked 2 scrambled eggs directly on the griddle and mixed them into the rice.  I then took all of that off of the griddle and cleaned the surface so I could cook the filet mignon.  Just a few minutes later, my entire meal was complete, and I can’t see how I could justify going to spend $100 easily at a restaurant for something I made so easily at home.

Overall impression: I absolutely recommend it.  Having the Kettle-Q really opens the door to cooking some dishes on your grill that you perhaps wouldn’t have deemed possible before, or perhaps the thought of attempting them was too daunting.  It is a well made piece of equipment and will likely last a lifetime.

If you follow the manufacturer’s recommendations for cleaning it, it is much easier.  Pouring some water or a bit of oil on when the griddle is cooling down yet still warm helps to release any residue.   A scrubber that can resist high temps is helpful.  I recommend the griddle cleaning kit on their website which has a stainless griddle scraper and a high heat griddle scrubber.   Putting a damp paper towel in the drainage well also helps to make clean up a lot quicker.

I think many people will enjoy this piece of equipment just as much as I have.  I know personally, I will get a lot of use out of it.

You’re able to purchase your own Kettle-Q as well as many other great products at www.littlegriddle.com.