A restaurant in Scranton, PA named Cooper’s Seafood House that had one of my favorite appetizers. Cooper’s bayou shrimp was a spicy mysterious concoction of deliciousness made in a cast iron skillet. In that zesty sauce were hot shrimp (with the shell removed) that you could gobble up first. The restaurant gives you a loaf of bread with dinner and you better believe you would sop up that extra sauce in the skillet. For years I’ve wanted to recreate that recipe however I’m making mine with a twist. My grilled shell on shrimp bayou style recipe makes the shrimp even more flavorful by cooking them in their shells.

I should note that since the pandemic hit, Cooper’s Seafood House has shortened their menu drastically.  I was saddened after driving there from New York that it is no longer on the menu.  My hope is that this is temporary.  That is the reason I was driven to create this recipe. In addition, the shrimp at the restaurant are not grilled prior to putting them in the sauce.  My thought is that they are actually cooked in the sauce.

Many years ago, while taking my sister to eat at Cooper’s, I noticed a giant piece of coal.  I pointed to it, laughed and said “Now you know you’re in Scranton”.  Apparently, one of the owners was walking behind us and heard me.  I took out a little note pad, got my attention and asked if he could quote me. I laughed, gave him my name as he wrote it all down.  Months later, I visit again, and there, on that massive piece of coal, was a plaque with my words and my name.  I couldn’t believe it.  There it remained for many years.

Shell On Or Shell Off Shrimp

Some people don’t like to get messy when eating in a restaurant and I certainly appreciate that. However, you’ve ever been to a crab shack you know that sometimes it is fun to get messy especially if it makes the meal taste better. They finally put one of those restaurants nearby where they serve you a bag of seafood with your choice of seasoning or “sauce”. I order my seafood with Old Bay butter and that is messy as all hell.  But you know what?  I don’t care because it’s delicious.  I will be using shell on red Argentinian shrimp from Omaha Steaks for my version of this recipe.

This variety of shrimp having a fresh, sweet taste and texture like lobster.  The shells add a depth of flavor to the meat while protecting them from overcooking which is why I love grilling them.  They also cook up quicker than other shrimp varieties.  A few minutes on each side on the grill and these shrimp are ready to eat.

For this recipe you have a few options:

Advantages Of Grilling Shrimp With The Shell On

The advantage of cooking shrimp with the shell on, is that they retain moisture and a lot of flavor.  Grilled shrimp with the shell on takes the flavor up a whole other level.  Whether you are cooking over wood or charcoal, the extra flavor the grill provides is unmistakable.  In it’s simplest form, grilled shrimp sprinkled with Old Bay is so quick and easy to make and one of my seafood favorites.  Certainly you can alternately cook shrimp indoors on the stove top or in the oven.

Disadvantage Of Grilling Shrimp With The Shell On

My Dad makes a version of bayou shrimp but only uses butter, beer and cajun seasoning.  While I know this would be delicious, I know that the one from Cooper’s is more complex than that.  The sauce is a darker brown hue with maybe a touch of red, thickened enough that it clings to the shrimp.  Herbs are present which I suspect being rosemary, thyme or a combination of both.  I’ve stared at that sauce and tried to analyze it for the better part of 30 years now.

Though my recipe isn’t exactly the same as Cooper’s it gives you a similar delicious sauce.  Don’t forget to get some great crusty bread to sop up the leftover sauce with as well!  The sauce gets it’s zest from the addition of cajun or creole seasoning and additional pepper.  Please note, though I don’t consider this spicy at all, I know my Mother would. Know the preferences of the people you are feeding.  I hope you enjoy it as much as I do.

.Love shrimp recipes?  Check out my recipe for Coconut Shrimp With Dipping Sauce or my Shrimp and Couscous recipe! 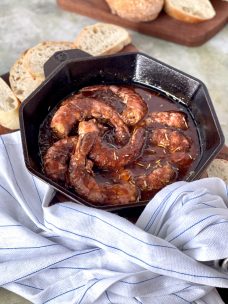