‍This post is sponsored by Omaha Steaks.  Rest assured all opinions are my own.

I love shrimp.   I’ve never been a fan of fish.  I love to catch them just don’t like to eat them.  Shrimp on the other hand are versatile little handheld flavor bombs that take on a variety of flavors very well.  If I had to name one guilty shrimp pleasure of mine it is the coconut shrimp with sauce that they serve at a number of commercialized steakhouses.  Truth be told, I don’t like ordering steak at those places.  If you can cook a better steak at home, why would you honestly?  Hence my affection for the coconut shrimp if I am dining there.

My goal was to try different methods to make coconut shrimp with sauce and see which I preferred.  I wanted to make a healthier version of the fried coconut shrimp like they have at Outback restaurants.   If I could master this recipe, I have no good reason to get anything from Outback.  The tasty warm and squishy dark honey wheat bread they serve with whipped butter isn’t reason enough to go there certainly.  In a time where I rarely dine out, ordering the coconut shrimp leaves me disappointed.  It’s the equivalent of eating McDonald’s french fries after they are cold.  I don’t care what kind of magical powers you have, no one is resurrecting those fries to the perfection they once were.  Same deal with the shrimp.  I needed to create my own recipe.

I’m a firm believer that if you want great food you need to start with great ingredients.  For my coconut shrimp I am using red Argentinian shrimp from Omaha Steaks.  These shrimp can best be described as a cross between shrimp and lobster.  They have a great bite to them and they cook in half the time of most other shrimp varieties.

Note: red Argentinian shrimp are RED when they are RAW.  They must be cooked prior to serving.

Despite their red appearance, Argentinian Red Shrimp are raw when you receive them frozen.  These shrimp only turn opaque once cooked fully.  Red Argentinian shrimp should not be confused with frozen shrimp. which are cooked prior to being frozen.  After being caught off the coast of South America, the fresh shrimp are frozen after being peeled and deveined.  These shrimp have no additives.

If you do not have this variety of shrimp, you may use a different type of shrimp.   However, do yourself a favor and buy shrimp that do not have any additives.  Enter the dark side of the shrimp industry.  Many shrimp suppliers add sodium tripolyphosphate, also known as pentasodium triphosphate or STPP to their shrimp to plump them up causing them to weigh more. Sodium bisulfite added to shrimp helps to enhance the color.  If you’re getting shrimp for dirt cheap, I can almost guarantee they have been treated with these chemicals.

Why is that a bad thing?  For a number of reasons it is less than desirable.  You’re paying more for water weight, the shrimp cook differently and the texture even changes.  If you try to sear a shrimp that is retaining water, when you cook them, that water goes onto or into your cook surface.  Forget trying to sear a shrimp sitting in a puddle of water.  It is the same treatment that scallops which are not “dry” scallops undergo.  Dry just meaning “untreated” in this case.

Making the coconut shrimp is quite easy.  Once your shrimp are defrosted, dry them off with a paper towel to remove some of the extra moisture.  The shrimp I used come in a 16 ounce package.  The red Argentinian shrimp from Omaha Steaks come shelled, de-veined and with the tail removed already.  If you are using different shrimp you can leave the tail attached if you desire.  However, I prefer it removed.  If it’s covered up after being fried, it is quite annoying to eat or cut around it.

Set Up A Work Station

Trust me, things are going to get a bit messy but it is worth it!  I used a large sheet pan to contain my mess.  In one bowl I added 3 eggs, in another a combination of white flour and plain panko bread crumbs.  To the flour mixture I also added Old Bay Seasoning because it is delicious on shrimp.   The Old Bay transforms these from being just sweet to being sweet with an extra kick of flavor.  The third bowl is for the sweetened coconut.  You may use unsweetened coconut if you prefer.

In addition to the bowls I kept a small sheet pan nearby to put the coated shrimp on.  Having a little bowl of water to rinse off your fingers along with some paper towels makes the process much smoother as well.

After singeing the tips of some the coconut in my trials, the best temperature I found when using the air fryer is 350°F.  If you prefer to use unsweetened coconut you may technically cook at a higher temperature (375-400°F)  but they will do just as well at 350°F.

Prior to adding the shrimp to your air fryer, lightly spray the basket with cooking spray so the shrimp do not stick.  I do not flip the shrimp in my air fryer because it gets airflow all around the shrimp.   If airflow is a concern in yours or if you need to flip the shrimp so they cook evenly, do it carefully.  You do not want to knock off the coating you put on there.

If you are frying the shrimp, add about 1/2 inch of oil to the bottom of a skillet.  Peanut or vegetable oil will work equally well.  Preheat the oil to 350°F then carefully place the shrimp in the skillet.  Fry until light brown on both sides then remove from skillet onto a plate covered with paper towels to drain excess oil.  Do not skip preheating the oil.  If you do, your shrimp will be greasy and saturated with oil, not crunchy.

How to Make Sauce or Dip for Coconut Shrimp

It doesn’t get any easier than this.  Mix equal parts of orange marmalade with sweet chili sauce until combined.  Both are readily available in most grocery stores.  This sauce is very similar to the one at Outback Steakhouse.  It is the orange rind pieces in the marmalade that makes me love it so much.  As much as I like pineapple, it’s not my first choice for a dipping sauce.  If you don’t want the orange flavor, give apricot preserves a try.

Prep Ahead of Time If You Desire

If you like, you can prep these shrimp ahead of time then freeze them.  To do this, freeze the shrimp on a small sheet pan first for about 45 min.  Remove from the oven and place gently in a covered storage container or freezer bag.  Remove from freezer when ready to cool.  It is a big time saver to do ahead of time.  I hope you enjoy the recipe.  Once you master a copycat recipe and can make it at home, you’ll never eat it out at a restaurant again.

Enjoy shrimp recipes?  Check out my recipe for Shrimp with Curry Peanut Sauce on www.grillmomma.com. 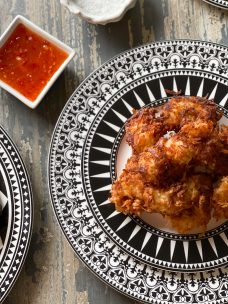