It is therapeutic for me to light up the grill to when the weather is beautiful outside.  Eating brats cooked in beer when it is nice outside is just an added bonus.  Granted, I do cook outside year round, but you can easily cook brats in beer on the stove, in your oven, or whichever method suits you best.  I’ll walk you through ways to cook them both indoors and outdoors.

Bratwurst or “Brats” for short is a classic German sausage made typically of pork and or veal.   A great brat is loaded with lots of flavor and has nice snappy casing that makes for a great bite.  Most bratwurst is white in appearance because it is not smoked.  However, that is not to say you can’t smoke fresh bratwurst as you certainly can.

A lot of commercially purchased brats are pre-cooked and you are basically heating them up by the method you choose.  If your brats are fresh however, you just need to adjust your cook time and method a bit.

For this recipe I will be cooking with Jalapeño Cheddar Bacon Bratwurst from Omaha Steaks.  You better believe if I have a choice between plain bratwurst and something with jalapeños, cheese and bacon in it, I’m picking the latter.  These brats are made from high quality whole muscle cuts of pork and a blend of spices.  Jalapeños, bacon and cheddar are also added along with a snappy natural casing.

This bratwurst is smoked in small batches with hickory wood and are delivered to you fully cooked.  If you buy fresh bratwurst, you will need to make sure it is fully cooked (160°F) all the way through prior to eating it.

There are a number of ways to prepare bratwurst but braising it in beer with caramelized onions will forever be my favorite.  This method can be easily done on the stove top instead of on the grill.

How To Grill Bratwurst

The most important thing to do when cooking bratwurst is to cook it gently initially.  If you cook bratwurst or any sausage for that matter over too high of a heat too fast, it will split open.  Think of brats as little packages of flavor bombs.  If that package rips open, out will come some of the moisture and whatever is in your bratwurst.  I don’t know about you, but I want to keep all of my cheese in my brats.

Always make sure your grill grates are nice and clean and wipe them down with a bit of oil prior to grilling. For this recipe specifically, you can either start your brats on the grill grates or cook them in a skillet on the grill.  Either method will work just fine.  The important thing is to get a bit of color on the brats without burning the outside.  Adding a very thin coating of oil to the outside of your brats is a good idea as well, especially if grilling fresh brats.

For this reason, if possible, set up a direct and indirect heat setup for your grill.  In other words, have a safe zone where the brats will not be over direct flames if you need to slow down the cook.  When grilling bratwurst direct I keep a close eye on it.  Once I have a bit of color on the exterior of the casing, I move it to the indirect side to warm all the way through or add it to my skillet.

Grilling Bratwurst in Cast Iron Or A Skillet

Depending on the grill I am using, sometimes I switch up my method.  I love using a nice big cast iron skillet on any grill.  Cast iron skillets have even distribution of heat and you can fit a lot in them.  Better yet, they keep your food nice and warm long after removing it from the grill.  Any skillet that can hold up to the high heat on a grill will do.  Cast iron is just my preference.  Sometimes I start the brats on the grill then move them into the skillet.  Sometimes I do the whole cook in the skillet.

Always preheat your skillet to medium heat prior to adding the bratwurst.  Place some oil in the bottom of the skillet to form a light coating.  The idea is to get some nice caramelization on the meat prior to braising it in the beer.  That caramelization gives the brats an extra pop of flavor.  If the bratwurst is fresh and not precooked, don’t worry, the meat will finish cooking in the beer.

How To Caramelize Onions

Add the onions to a preheated skillet with some oil or butter.  Slowly cook the onions stirring occasionally until they turn golden and a brown hue.  The longer you cook them, the more rich the flavor will be.  Although it might take upwards of 40 minutes to get a nice deep brown color, test them when they start to darken.  Slow and steady wins the race here.  Cook onions too fast and they will burn and be bitter.

Feel free to make the caramelized onions ahead of time if you choose.  If you have an hour to hang out around the grill, I recommend making the onions and cooking the brats right in the same skillet.

Adding the leaves from a sprig or two of fresh thyme gives the caramelized onions a great touch of flavor. You may omit them if you choose to.

The recipe itself is easy I promise you.  Grab a nice beer you enjoy and pop one open while you’re cooking if you desire.  You’ll only need one bottle of beer for the recipe.  I personally don’t recommend an IPA beer for this recipe as they can be on the bitter side.  Grab some great rolls or eat the brats right out of the skillet.  Either way, I assure you they will be delicious!

Brats Cooked in Beer: The Method 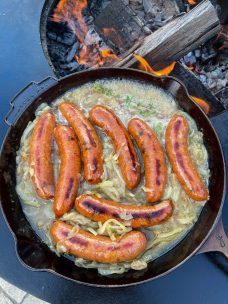 Looking for more pork recipes?  Check out my recipe for Smoked Sweet and Spicy Pork Chops.

1 thought on “Brats Cooked In Beer”